This project is a computerized multimeter which incorporates a volt meter, ohm meter, continuity meter, voltage drop meter, component tester, and graph. The program interfaces with a hardware microcontroller programmed with C++ code. The microcontroller knows how to perform various tests and communicate with a computer via serial over usb. The C# program can execute commands by sending them over serial and perform tasks based on the response given by the microcontroller. This functionality is run in a background thread so that the process won’t interfere with the user’s actions. The sending and receiving processes never directly communicate.

The serial protocol developed for this project uses a series of important characters, values, and separators to support multiple values.

Information is sent in the form of a command. A command begins with the character ‘#’, and ends with the ‘~’ character. The first integer to follow the ‘#’ character is the primary set of functions to be executed. The next int value (separated by a ‘/’ character) indicates the specific function. Numbers following that pass specific values into a function. The “measure capacitor” command would look like this: “#10/3/500/0/5/2/10000/4~”.

The way the commands are parsed allows for flexibility in what can be sent. For example, the command #12~ would execute the same as #12/0/0/0~. They would also be considered equal upon comparison.

Upon receiving a command, the microcontroller will immediately send the same command back, this time starting with the ‘@’ symbol. This indicates a handshake request. The computer then sends the confirm char ‘*’ or some other character to reject the command. This ensures that there are no transmission errors. Upon receiving a handshake command, the computer compares the value to the last sent command. If they match, it sends the confirm command.

When the program is run, the serial object will attempt to connect with the hardware. If it is successful in establishing a serial port connection, it begins a background thread which starts to read data on that serial port. The program then sends a “hello” command (“&&&&&”). The thread waits for a response (*~) from the device. If it receives this response successfully, the program then loads the window and starts normal operation.

If any point in the initialization procedure above fails or throws an exception, the program will display a message box asking if the user would like to try to connect again. If so, the settings window will appear, providing the user with the opportunity to verify port name and baud rate. Once this window is closed, the program will restart and attempt to connect again. This same procedure is followed if the device is disconnected during operation.

If the user does not wish to attempt connection again, the program will throw a SelfDestructException, which will be caught by the Main() loop. The program will return and exit. This ensures destructor events still get called.

When the program is terminated for any reason, the background thread is stopped by calling the CancelAsync() function. 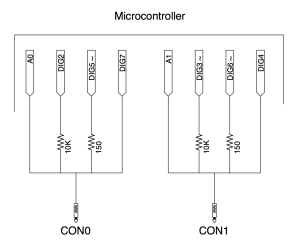 The physical hardware is very simple and consists only of a microcontroller and four resistors. The microcontroller can change the assignment and function of each resistor depending on the task at hand.

To demonstrate the ohm meter function, a 68KΩ 1/4w metal film resistor was connected between the two meter pins (0 and 1). The device found values between 66.97KΩ and 68.18KΩ, which fall within the 1% tolerance of the resistor, as expected.

The component test functionality is shown here testing a faulty resistor. The user expects a 330KΩ target value, however the tests return an average value of 32.4KΩ, which is only 9% of the target. This indicates a faulty resistor.

The graph function shown here features a scrolling graph of resistance values alternating between 33KΩ and 56KΩ. The irregularities from switching produces occasional spikes. The graph automatically updates to the best scale for the data. 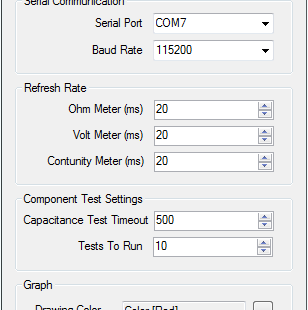